After two long months of living vicariously through Victor, I finally got to see Ecuador through my own eyes last week. Victor convinced me to write a blog about our incredible weekend together, so we each took different parts of the adventure. Make sure you read his post here!

I landed in Quito on a Thursday morning, groggy and disoriented after a red-eye flight and layover in Panama City. Thankfully, I was only responsible for a couple of small tasks: getting through customs without saying anything stupid, and finding Sr. Bolivar, the driver Victor had arranged. I managed to accomplish both of these tasks uneventfully, and was quickly on my way to downtown Quito.

The plan was to meet Victor at a restaurant below his apartment called The Green Choice, so I found a table and waited. After asking the store clerk for the wifi password and getting iPhone pictures of her granddaughter instead — the first of many signs that my Spanish is not what it used to be — Victor finally found me. Turns out I was in the smoothie store below The Green Choice. Oops. We took a few minutes to unpack and eat empanadas before he had to return to work, and I decided to follow him downtown to take advantage of the sunny afternoon in Quito. I took a pit stop at his office, mostly to confirm that Victor actually works while he is in Ecuador. For those readers who are wondering the same thing, I can say that he has at least found a convincing way to fake it 🙂

For the rest of the afternoon, I explored the gorgeous Parque La Carolina and wandered around Quito’s professional district. That evening, I would get my first real taste of what makes Quito special when we had dinner at a traditional Ecuadorian restaurant in the chic La Floresta district near Victor’s apartment. I ate seco de pollo as my main dish, a full plate of chicken, rice, and hot aji sauce. But the true winner was the appetizer: locro de papas. As only a true gringa could observe, the thick soup tastes like someone put mac n’ cheese and mashed potatoes into a blender and added avocado to the top. In other words, I could eat this three times a day. We ended our night with a canelazo (a warm, cinnamon-y, strong drink) at a nearby bar called El Pobre Diablo. Anthony Bourdain visited this bar when he filmed an episode of his travel show in Ecuador; since this episode was responsible for 99% of Victor’s knowledge of the country before he moved, it was only right to pay homage.

Friday was dedicated to sightseeing in Old Quito. We knew that we were leaving for the smaller town of Cuenca that night, so Victor and I tried to cram the highlight reel of his six weeks in Quito into one day. It was an amazing day that would make a very boring blog post, since Victor has discussed most of these sights already. I’ll focus on a few highlights. The overall contrast between Old and New Quito is striking. While New Quito feels quite modern, Old Quito is dotted with churches, tiny cobblestone streets, and rainbow-colored houses that line green hills. We visited some of the most impressive churches in the morning, including La Compañía de Jesús, the Baroque church that took 160 years to build. Pictures were strictly forbidden, but I figured seven or eight selfies couldn’t hurt.

One of my favorite things to do in any new city is get as high up as possible and find a viewpoint. Victor and I had lunch with his Venezuelan friend, John, at Cafe Mirador, which takes customers to a sky-high patio in a rickety elevator. Old Quito was even more photogenic from up here. Afterward, the three of us squeezed in an afternoon visit to El Panecillo because the very top of the winged statue provides an incredible view of the entire city. This is about when we realized we were running late for our flight to Cuenca. Luckily, Victor and I found a hero in Patric, Ecuador’s fastest and least humble taxi driver. He sped us home in a third of the time it would take any other driver to cover the distance — his claim, not mine — and I spent most of the ride assuming I was about to die.

For a description of our first night and day in Cuenca, visit Victor’s blog here. I’ll focus on our last day in the city, which we decided to spend exploring Cajas National Park.

Cajas is a vast natural reserve only about 30 minutes west of Cuenca, but it feels like you’ve stepped into a different realm. The jagged cliffs, eerie lagoons and yellow, mossy hills feel like something out of a Grimm’s Fairy Tale. The park ranger told us to take trail one, an easy route that makes it “impossible to get lost.” General advice: never trust someone who says that, especially if they don’t offer you a trail map. 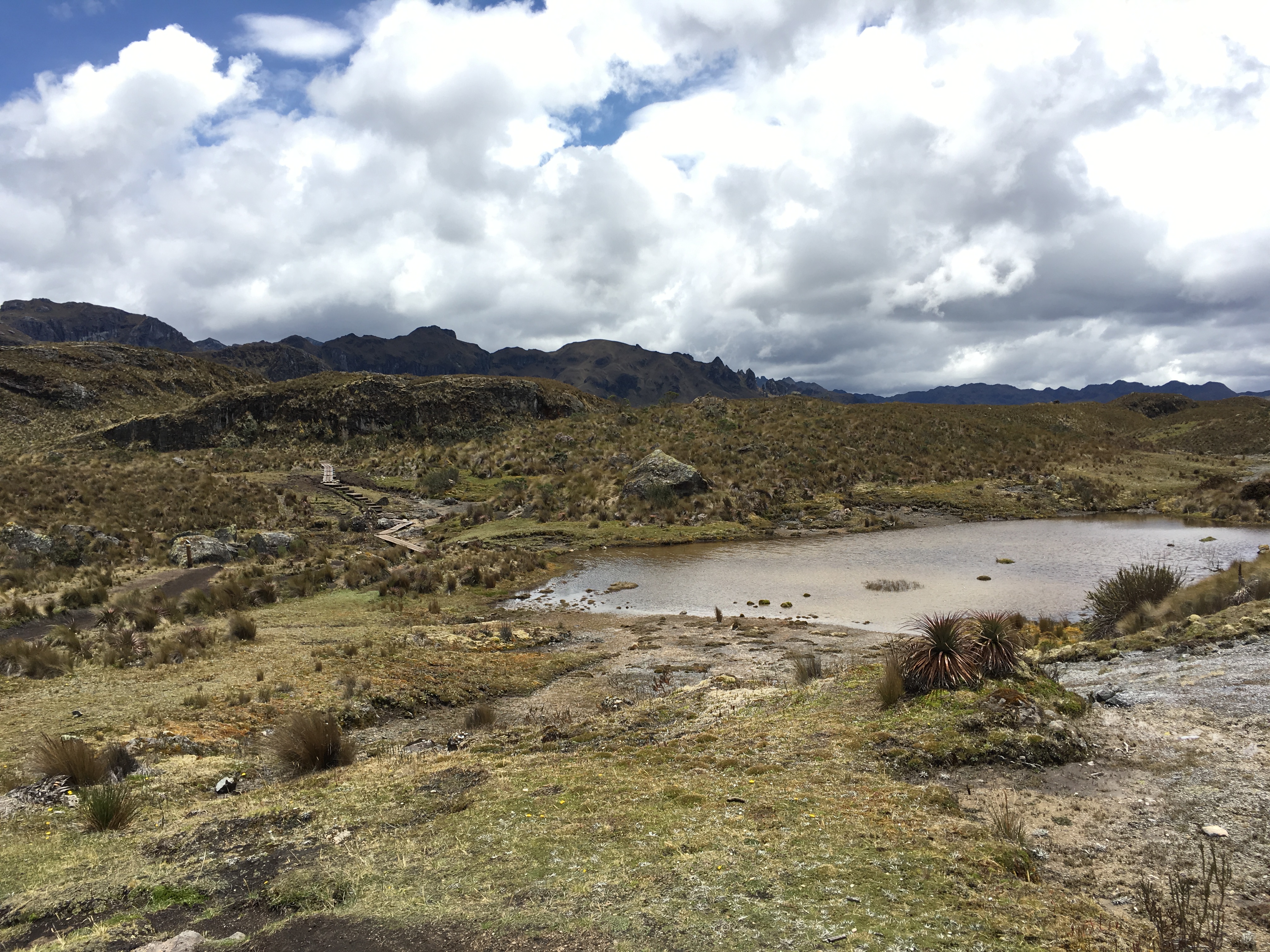 The route was stunning and confusing. Signs indicated various checkpoints along the trail, but many of them were broken or missing. We often stumbled into dead ends. We wandered deeper into Cajas for two or three hours before encountering a larger group who seemed to know what they were doing. The man at the front urged us onward, assuring us that we were going the right way. This led us well outside the boundaries of the park and forced the two of us to turn around and retrace our steps. We eventually realized he wasn’t actually a guide, but just a guy who thinks he is good at directions. Classic.

Eventually, we found our way back to a trail (okay, Victor did) and saw an empty parking lot ahead. We had to decide: start a steep climb down the mountain to the more accessible part of the road, or search for a bus stop near the parking lot? We agreed to try the parking lot first. For a few long minutes, no cars passed. Just as we were about to give up, a bus turned the corner! We waved our arms wildly and it actually pulled over, the driver summoning for us to board. We sprinted down the road and sank into our seats, feeling tired and very pleased with ourselves. The true moment of triumph happened ten minutes later, when the bus picked up our ‘friend’ who had so confidently led us astray. He looked a bit defeated, and we gave him our best smug smiles.

This was only the beginning of the excitement. Find out about the rest of our weekend here.

Overall, it was amazing to see what Victor’s life looks like in Quito and spend some quality time together. We’re already planning our next adventure to the Galapagos in December, and I can’t wait. Until then, I’ll be reading the blog with the rest of you!