When I joined a tour to visit Cotopaxi Volcano, I knew things were going to be different. The hike starts at around 12,000 feet and we were going to ascend to where the volcano starts to become glacial at 16,400 feet. Quito‘s altitude is at around 9,000 feet, so when travelers arrive, they often need a couple days to adjust. It is common for people to have issues with head and stomach aches just from the change in the air. I was fortunate that my only problems involved having to cut a few runs short.

On the drive to the volcano, our guide took us to a stop where we could pick up coca leaves to help with the altitude. For years, the locals have been chewing coca to help them with altitude sickness. I did not have any altitude problems, so I may have to thank the leaves. In all honesty, chewing on leaves wasn’t that enjoyable.  They tasted just like leaves.

Cotopaxi is one of the most well-known volcanos in Latin America.  It is the tallest active volcano in Ecuador. It is not one of those ‘active volcanos’ that hasn’t gone off in hundreds of years. The last time it erupted was in 2015, two years ago, with ash making its way to Quito. The top of the mountain had been closed since then, and reopened around one month ago. 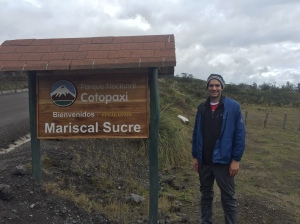 There were several reasons I was excited to take this opportunity to live in Ecuador. The culture, the food, the experiences…but after a couple years in Boston I was extremely excited to not have to deal with snow. I should have researched my volcanos before making any assumptions, because they got some snow on them! Guess my time in Boston came in handy. If I thought the clouds at Pichincha were heavy, I was fooling myself.  For most of the hike up Cotopaxi, it is difficult to see much distance because of the heavy cloud cover. It was also difficult to see a lot of the summit. There was a quick timeframe when the clouds cleared up, and I was able to see some of the top. 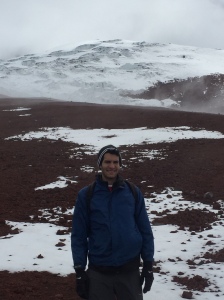 After reaching the glacial point, we started our descent. Despite a little dusting of snow, I made it down to the bus without a problem. Then came my favorite part of the day, mountain biking down an active volcano (easily the most badass sentence I have ever typed). It was a bumpy ride, but I didn’t have to do any pedaling. All I had to do was hold on and enjoy the view as gravity did the work for me. Once at the base, our group grabbed lunch at a small restaurant nearby and I stayed at a hostel outside Quito to rest for day two of the trip. I guess I was the only person who chose to do a two day trip, because I was the only person in the hostel room. It was nice having my own place and I quickly fell asleep.

Cotopaxi was hiking up an active volcano, Quilotoa was quite different. Around 800 years ago, the volcano collapsed within itself and the ice on top formed a lake in the center of the huge crater.  Instead of hiking up, this adventure was a hike down into the crater. I was picked up from the hostel that morning and after a quick stop at a market and couple hours on the road we arrived at Quilotoa.  Looking at the lake from the top is a great view. The water is magnificent.  It changes colors often because of the material underneath the water. Going down is a quick half-hour walk down and it is a great site to see up close. Several locals are at the bottom to offer rides up on mules, quite a smart idea because the walk up is a daunting one. I stayed strong though and marched my way back up.

Those trips were great ways to see the country, and are also great ways to meet people, especially people who spoke English. There were lots of interesting people from all over the world. I met travelers from Austria, Brazil, France, the UK and even someone from Alaska.  I was able to learn a lot and plan out some of my future trips. Those last two days were exhausting but so enjoyable. At this point, I feel like I’ve earned a relaxing Sunday night with the new season of Stranger Things. #VidalaVic

29 Replies to “Vida la Vic #7 Over and Into Volcanos: Cotopaxi and Quilotoa”